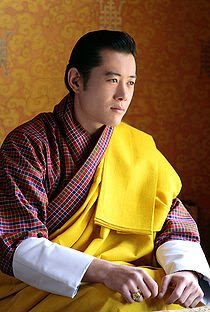 Let me tell u about Bhutan… this was told by my GEO-GOD bro who went something like, “We have the baddest and the most dangerous neighbors… and out of these sad next-doors, we have a gem in a country like Bhutan coz v already share a friendly relation wid Bhutan… in fact Bhutan was the 1st country to recognize Independent India… our relation has more to do with heart than wid bilateral give n take… Bhutan as we all know is a hermit country, ruled historically by Kings n inhabited by calm buddhist subjects…. this country ws recently called the happiest country in the world coz it does not care about its GDP but works on its GNH (Gross National Happiness)... just imagine something similar to that happening in my city, Mum-bye…(silent goodbye)!!…

This nation has only 1 functioning traffic signal in Thimpu (its capital) n ppl don’t care to follow it coz there is hardly any vehicles n if at all, they r not crazy about speeding… they hv only 5 elevators in whole of the country!!!!…. of course ppl will say its a small country wid minuscle population bt u can’t overlook the serene simplicity they exhibit…now the gud thing is their king Wangchuck decided to go 4 democracy voluntarily — no protest, no bloodshed, no opinion..simply handed the crown over to his son n now the country is in its 1st yr of functional democracy….. he did it coz he is educated in western stream n realized dat the times of monarchy is beyond the horizon….n 1 more thing, he’s a huge MOVIE addict n has the biggest movie collection in the whole of Bhutan, something 2 cheer for me!

The surprising thing abt this episode is that our students r not thought anything abt our neighbors in detail, thus fueling cliche of they-r-enemies mentality… and the sad thing is our history books (even in SSC) ends at a chapter called INDIA WINS INDEPENDENCE… thus pulling a brake to better understanding of the unfolding events after independence…. its no huge wonder dat our kids don’t know neither natl anthem nor natl song… forget abt its verbal meaning…. no country in the present time can show such unpatriotic fervor… nationalism is not thought in school, it just brings us up wid us… i’m goin on n on… dat is a syndrome called Shaktian Effect!!
Posted by Shakti_Shetty at 7:00 PM No comments: Links to this post

I woke up at 4.15 in the morning coz i did not want to lose any chance of watching red carpet ceremony at the Kodak Theatre in Los Angeles. Of course, I was going to watch this thing from my home TV but what was unique about this year was the fact that Slumdog Millionaire was considered to be a hot shot in terms of odds and there was very little doubt that it would be spurned to stand overlooked. But then, one can argue that the Academy has always proved to be a party pooper when it came to general mass hysteria. The Academy was audacious enough to avoid Martin Scorsese for a long, long time until the game of hide n seek couldn’t be left to reason and at the same time it was foolish enough to let The Shawshank Redemption go empty handed. If the Academy was right and sagacious in its way of dealing then the same could have been wanted out of every movie that’s made around the world, but that isn’t the case and so we can forgive The Academy for overriding over Orson Welles and David Lynch’s The Elephant Man.

But that was legacy, legend and lores of Oscar’s magnificent history. Today it was a magical tale for a movie called Slumdog Millionaire. Every single thing that followed once Hugh Jackman took the stage and made excellent parody of all movies nominated for Best Picture to the last moment when Slumdog Millionaire was handed the Best Picture statuette, every single thing was seductively celestial. There was hardly any slip-ups or accidents on stage. Even Frieda Pinto was elegant and sharp when she came hand in hand with Liam Neeson to hand away the Oscar award for Best Foreign Film. She didn’t miss a beat while announcing the nominated movies.

Slumdog was nominated in 10 categories and luckily scrapped 8 while pundits were betting on it to make it 10 on 10. Yet the achievement was nonetheless exceptional taking into account numerous liabilities such as inadequate finance, lack of star cast, no set up or state-of-art studio… still with the help of a strong script and talented kids from around the street and some remarkable performance delivered by big time actors like Anil Kapoor and Irfan Khan, the movie found its path.

Without its music, no one would have found that chord connect with the movie but thanks to AR Rahman’s magical resonance and montage of songs put in small bits but in proper place, the movie finds its tempo. And thankfully, the Academy didn’t mess up this time as Peter Gabriel wasn’t willing to perform with AR Rahman as he didn’t like his song being cut to 65 seconds in order to accommodate the tight schedule. But Gabriel or no Gabriel, the show went on with full fervor and the Indian Dhols and Bharat Natyam exponents took to stage along with AR and did a show unforgettable for a long time to come.

There was something purely mystical about the way AR carries himself. There have been moments when I’ve felt God’s sanctity in AR’s songs and music and no wonder, i sometimes feel the touch of his halo when i see him walk up the stage with a modest drooping shoulder and collect some words to thank people who really mean close to him. And he didn’t change that thing about himself even at the Oscars. He thanked his team at Mumbai and Chennai like he often does. He also mentioned his mother. He didn’t forget to thank the ALmighty for everyone knows that Rahman is a pious sufism-inclined musician who happen to follow music as a search of life. Even Resul was fabulously calm when he uttered his reason of belief in the sound of Om. The whole speech was beautifully executed.

I followed this year’s Oscars and wish to congratulate Slumdog Millionaire on its historic victory at Oscars.This ‘curio’ was sweetened by the fact that AR Rahman, Resul Pookutty and Gulzarsaab were honored with befitting awards, thus making the event “Indian” in celebration. The whole movie’s cast, particularly the kids who acted in it, were present on the stage when the movie was handed the Best Picture award and that i believe is one of the most defining moments at Oscars this time. The Indian feel of this year’s Oscars can’t be denied, be it AR Rahman and Resul Pookutty’s inspiring acceptance speeches, Smile Pinki (a story based on an Indian girl) winning an Oscar for Short Subject Documentary or AR Rahman’s lively performance with Dhol and Bharat Natyam dancers moving to his tune on stage. The scene was something completely new to Oscars and a path-breaker in the cultural context.

Slumdog Millionaire is a movie made with talented but obscure Indian cast, directed by a British director and produced by an American production but still managed to garner such extraordinary success, support and recognition. However it failed to strike a chord with the common Indian masses and that part of the debate could get intriguing and argumentative at best. .All and all, this movie will be seen as a bridge to fill the gap between Indian and Western Cinema in the years to come and will create more cross-overs with bigger plots and better visibility factor. Well done, Slumdog. Jai Ho!
Posted by Shakti_Shetty at 5:10 AM No comments: Links to this post

I care no more


No more nests to build, no more seeds to spill
I care no more
of love and pain and change and shame
I've walked too long with my head intact
and my draining brain and my stupid lines
can't stay the same with my face of ole
need to paint a life i never knew

No more woods to carve, no more water to draw
I care no more
of hatred and rain and sun and bane
I've touched that canvas of reasoning in past
and have seen with my eyes how wrong i am
won't give a minute to my sorry state
will move on and move long afar

No more repairs needed, no more words to preach
I care no more
of trust and fray and loss and game
I'd heard some tales of my gods up there
the mistakes they did and their lies
now i need no god, no words to chant
I'll create my image on the drooping sunlight.....
Posted by Shakti_Shetty at 5:07 AM No comments: Links to this post 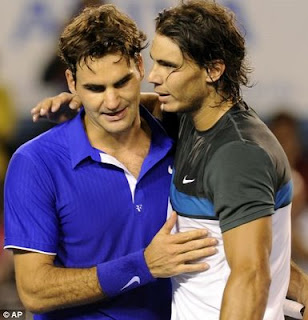 I’ve been following Roger Federer since long and there is one thing I’ve learnt about him that makes me love him more; he is inhumanely transparent. He is not only a great champion but a reasonable human being too. He is not caught up in coruscating glitter or glamor like most of the contemporary sports persons are, notwithstanding the moolahs he rakes on tour. Not since Borg have we seen a calmer figure on court with such sheer talent. But after watching yesterday’s final against arch-rival Rafael Nadal in Australian Open, I’m left with some questions that are better left unanswered to time.

He was defeated in five grueling sets and if that wasn’t heart wrenching, he wept his emotions out, watching Rod Laver handing the coveted trophy to Nadal. Now most of us tennis lovers will have so many doubts about Federer’s prowess on court, especially against Nadal who has long eclipsed Federer in one-to-one battle. Every great player, sooner or later finds his successor and there is no doubt Nadal deserves it more than any one else out there, yet being a Federer follower, I just wish that he bring the world to halt by lifting Roland Garros in May and let all mouths gape. That is only possible remedy to this tale of error and succession.

On any given day and under any circumstance of play, every spectator would accept the fact that Federer is a genius who doesn’t come along too often, and Nadal is a hard sweater who won’t let a single ball go wasted. Federer is mentally a weaker opponent than Nadal who on the contrary, sums up as a better and more versatile player under suppressing pressure. Still, I just wish, and I’m sure Federer won’t disappoint. He will surely lift much more than titles than Sampras or others, if at all. Till then, keep smiling and fight hard, Fed.
Posted by Shakti_Shetty at 10:06 PM 3 comments: Links to this post