A prank gone all wrong 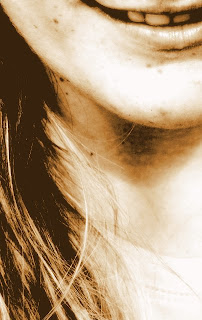 The following is inspired by a true story...

There was this girl in a Medical College and stayed in hostel. She was beautiful, rich and spoilt. She was a bit disturbed by some personal problems and didn't like mingling with other students on campus. This created a sort of sequestrated feel about her character. She was probably the only girl around without any friends, not even female ones. No one knew why she was disturbed and what was her side of the story. Though a lot of fellow students, particularly boys tried to make an advance and kindle friendship with her but she stayed aloof and rejected any relationship. The boys were kept at a distance and girls were envious-pretty balanced scale of enmity.

Slowly but steadily she was becoming the talk of the campus not only because of her solitude but also because of her beauty. She wasn't particularly attentive in classes or practicals but she made sure she was never absent. The teachers had no issue with her detached personality since her grades were decent.
Once, a brash boy who thought he could claim to be the first to develop 'contact' with her, decided to express his love to her and the words he used were heavy with emotions but didn't create the same reaction on the girl. On the contrary, she went ballistic with her rigid response and called him names such as Romeo, chauvinist and a fool!

This encounter from which he had expected to bear romance had gone all sour and prickly. He was no doubt hurt but he wasn't the one to stay silent. He decided to teach this arrogant girl a lesson. He contemplated a plan he thought wasn't horrible but no less innocent either. He along with some of his friends decided to play a prank on her.

So, this girl returned to her room like usual after visiting library and having food at local mess. As soon as she entered the room and locked the door, someone strapped the door shut from the outside as well. Obviously, she was irritated and surprised by this act. She called out to open the door and kept on banging it. But no one responded as if like the whole hostel had gone deaf.
Tired of this prank, she retired to her bed. As she leaned back to lay her head on the pillow, she felt something under the pillow. This was the actual prank awaiting her. So out of curiosity and anger, she lifted the pillow to find an amputated hand which no doubted was made available from College morgue.

A deep shriek boomed out of the room. This cry of fear was reciprocated by a equally loud choir of laughter from the crowd standing outside the door, presumably waiting to hear the bawl. But the laughter outnumbered the wailing voice because the deep sound of fear and angst didn't repeat but the laughter kept on multiplying.
The prank was supposed to have ended here and someone was supposed to unlock the door and let the poor soul out. But that didn't took place, may be everyone were so indulged in laughing riot that they forgot to lower curtain on the show.
As many hours passed by, one of the participating girl realized that no one had opened the door and she decided to open it herself but at the last moment thought it would be better if someone would accompany her so she asked one of her friend and ultimately collected a few more students and they all came to open the door and see if the girl was asleep or what.

But the sight they were going to witness was neither called for nor planned but a severe consequence of a blatantly irresponsible act. As soon as the door flanged open, they saw that there was no one bed, nor under it, the windows were tight shut from inside, and this created panic. Amid this ill puzzlement, someone from the crowd glanced above to the space between the ceiling and cupboard.

The vision of a girl with dried tears and disheveled hair and strange mannerism greeted them. The girl was sitting devoid of any display of emotion on her face but her teeth were busy chewing something. The very sight of this once beautiful girl turned diabolical sent chills through the crowd because she was indiscreetly chewing the amputated hand that was the tool of joke for the crowd staring below.
The mental trauma the girl suffered is unfathomable but the question is the level of barbarism one can stoop to just to get a kick out of it.

[The credit to this story goes to some independent film makers who made a short film on the same story.]
Posted by Shakti_Shetty at 3:51 AM 9 comments: Links to this post 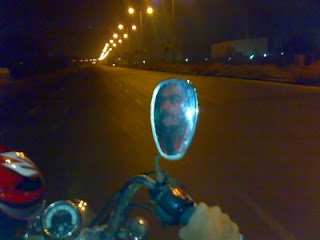 This morning, i did something which i had attempted to do quite some time ago, in fact about 4 years ago but failed miserably-----riding a motorbike. But today, at just before dawn, after heading for home from office, as usual i was pillion seated and out of sudden i asked my dear friend Tushar to let me drive his Enticer and for his kind n laidback nature, he allowed me.

And i was getting all jittery with the long-forgotten instructions of neutral-kick-clutch-gear-vroom. But after 4 futile attempts at kicking the damn pedal, Tush took pity n at last got the motor roaring... now was the time to hold the clutch and gear one, followed by the hardest part of leaving the clutch slowly along with triggering the accelerator and quite strangely, i got it right and off i go....into the darkness of freedom n liberation!!!!

This ride will be memorable for a long time to come coz I'd decided quite a long time ago that I'll always be the pillion-seated rubbernecking the views around and free of worry... but after getting my successful kick (or shud i say, ride) today, I'm thinking of pursuing this skill... must say, the ride was gr8 and i wish i learn the basics of using brakes, changing gears and riding like a pro...coz me, Tush, Danny n Deeva r thinking of riding to Goa on bike!!!

Now the interesting thing abt today's ride was how i stopped the bike n believe me, even Valentino Rossi wud have been proud to see how i applied the brake along with rising accelerator... it skid a good two meter apart and then wobbled as if the bike was scared of its rider!!! Good biking and gr8 life is awaiting me....vvvvrrrooommmm
Posted by Shakti_Shetty at 6:52 PM 3 comments: Links to this post