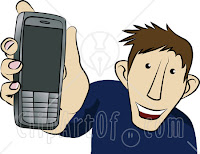 Everybody loves his/her cellphone. It has become an integral part of urbane (and mundane) life that makes it quite inextricable in sensible thinking. I too loved my cellphone. It wasn’t a fancy Blackberry or NSeries but still it was dear to me. We literally slept together, I on the pillow and it beneath it. All was going fairy tale well until this morning at around 4, when out of sudden it wasn’t there anymore. It got lost. Or stolen. Or maybe lost and then probably stolen. Anyway I was the crying baby on either side of the argument. For the record, this is my third mobile which I successfully lost in the last four years. So that validates my absent-mindedness and my declining faith in humanity!

The first thing you feel after losing your mobile is utter desperation, a kind of vacuum. This feeling has nothing to do with your mistake of being so careless. It is very nascent in its purest form. You start reminiscing who was the last person you called. From whom did you got your last SMS. How will you get all the contact numbers back. By the way, the last SMS I received was from my dear friend Tanmay who informed about Rooney’s 55th second goal against Wigan. I was thrilled like anything for Man U topping Liverpool soon, unaware of getting my mobile vanished for good just an hour or two later.

Cellphones to most of us is a link to outside world. It connects us exponentially to people irrespective of the impending distance in between. It is a benevolent invention in spite of constant scientific threats availing it as radiating toxics into our brain (through ear!) and even low sperm count (due to closeness!). Besides, people don’t live with nothing to dare anymore. All are dangling on the edge of danger and who cares about invisible radiation when there are so many visible and imminent vices staring us right in the eye. Radiations are like cellphone stealers, I must add. Both can’t be seen.

Coming back to anguish and self-pity, after realizing this vacuum, there flashes the torch of practical bereavement. And foremost of it is the money put behind the gadget, the balance in it, the numbers, birth dates of friends, notes and gods-know-what. You start cursing yourself for being so birdy and also for not noting down the numbers in a diary or something. Balance is not a major issue in most cases because we all know the stealer is not stupid enough to make a call that will come back to him and nab him. Mostly, it’s a safety measure practiced by ‘expert stealers’. So your balance is assured but what about everything else. You have developed a connection that is so strong and unique with this petite inorganic device. There is very few non-living creatures with whom you might be able to develop such a bond viz. iPod. But then again, the list is too small to allow competition. How many electronics gadgets do you sling along with your wherever you go? Very few, in fact very, very few. And luckily, mobile is one of them.

It not only transcends words in both verbal and textual form but also keeps it intact and affirmed in its record, thus building the lost human touch carved in by time and distance. You won’t take your computer along with you to the market or even laptops are pretty much elite in this case. Mobile with its granular size and indispensable necessity can squeeze in, anywhere, anytime. India is by the way one of the largest cell using nation in the world and no surprise, huge cell phone companies are using national sentiments in advocating their products. People are generally emotional. They talk, argue, gossip, chat but in the end, words fill up something that was missing. Mobile does that job today. Earlier telephones were employed for vis-à-vis but still telephone wasn’t ubiquitous, at least not in a developing country for sure. Cellphone is not a luxury like telephones used to be. It’s like an everyday necessity now, standing on the same scale of usage to a doctor and a temple priest as well.

After weeks of advertising how good a movie SLUMDOG MILLIONAIRE is, I’m getting back in business with cellphone spiel! However, the funniest part of all this tragedy was the look on my face when I realized my cell wasn’t in my pocket. You should ask another dear friend Tushar who witnessed this wretched hilarity. It takes courage to overcome errors. You need to be careful so that moments don’t catch you unawares. Losing a mobile phone is one thing and losing it repeatedly is another. If you don’t learn from your mistakes, then you lose the right to err. I haven’t lost my right yet, though!

After all, it was just a mobile, right. Whatever the nostalgic story be behind its success and fame, it’s still just a plastic plated, rubber padded, radiation emitting equipment that could be replaced anyhow. There are much more important things out there that could cast a horror in your life if you lost them, for say, your mind, your touch of reality, your sense of knowing your friends and family. That would be truly terrible. I’ve watched this splendid movie Away from Her and I can say it must be something else. As for me, I’ve got myself a Rs.500 ugly looking third-hand mobile. It reminds me of my penitence to be more attentive about stuffs around. My dad pasted me an unforgettable quote on hearing my predicament, “If you keep on losing things like this, I wonder, whether you’ll remember not to lose yourself someday.”
Posted by Shakti_Shetty at 9:01 PM 2 comments: Links to this post

The clarity of oneness and the transparent reporting by journalists were hardly meddled by any editor until and unless some fiery deadline was on bait. Radio was the uniquest way of expression and newspapers, the solemnest. But today, with emerging mass media of various kind and size, it can be safely said that journalists are in a dire twist of choice. They are presented with a hoi polloi so variant in nature and so depicted in their perspective, that it hardly makes any sense to demarcate their trust.

The journalists are having a hard time. They are already enveloped with heavy duty job and now they are having a heavy mass on the tip list. Entertaining a diverse group of people could get challenging. One of the toughest jobs, after fishing, must be journalism. The most inadvertent changer of views and implementers of new ideas on print don't get it that easy as it seems with the crisp presentation of news in studio or on field. They are embedded in wars; freelancers don't even get that luxury, so to say. Yet with the change in trend and demassified crowd on run, these poor cluster of reporters are made to hold marbles far exceeding their palm.

The standard of media is very subjective and even objective, in case of repressive governments, such as China and Pakistan. The media have always showed inextricable loyalty towards exposing the malignant power on chair. They could be termed disloyal or even quislings! But their purpose of unifying en masse onto similar ground is astonishing and noteworthy. In United States, the scenario is a bit too complicated. Here the mass media is ruled by a consortium of less than half a dozen of big media houses. These houses have made sure that their unanimous money churning roll-outs of news stay uninterrupted, as seen in recent Afghanistan and Iraq war fiascos. European mass media seems to bask in the same groove as it had shown in the 60s and continued on. It provokes intellectual bias and do so without clashing out with its consumers, but reviling was hardly encouraged in this paradigm of free society. Now, where does India sub-continental media stand in these criteria. Moreover, where does India stand here, duly because of its enormous influence over the place?

The answer could be both the way of reasoning. The common populace is tired of the old clichés prevalent in print and screen. The new generation wants something refreshing and spookier than prescribed. Taking into account the fact that India is the world's youngest nation, with 54% of its population lying in the age bracket of 15 to 25, which means in 15 years time period, all the grooming of the current generation will fruition into actual utopia of change. The media is juxtaposed between finding a mere balance between this quickly receding gap in thoughts and actions. A look at Indian news channel in regional language, save DD, all others are mere display of tiring effort at keeping the TRPs on trail of competition. It is pathetic and embarrassing to witness such degradation of an effective platform.

This is the problem. What about the solution. The answer lies in the demographics and the distribution of population across the nation. The city lurkers are critical and have opinion on every issue around whereas the rural scouts don't show such spontaneity and are limited in their horizon of sagacity. It doesn't imply to say that the urbaners are high handed in the design of mass media output. It simply cites the involvement in the architectural by product of media. The rural world lacks in participation what urban world lacks in unanimity. This colliding factor isn't helping the media cause in the bigger picture. The news prints are faring better in this case. All the newspaper, almost everyone, has this obligation to reporting as per se, the scenario. A single paper charges in minute scale and dwarfs in comparison to the www score of pay per view format.

Education too must be a culprit here, not mentioning the reason behind its uninformed distribution but the lore tale myopic view that is rampant in most Indian people and are anarchical subjugation of facts on hand, and jumping upon the wagon of explicit entertainment. Media can't grow well when its provider is not meted with a constructive remedy. Besides, polarization is good provided the polarized concept is free of prejudice and bias. Now, how to bring the new tech world to a point when such bias is eliminated free hand wombs the true solution. Indian mass media along with its postal caliber was always well rated in global rank, but in recent time, due to cable TV invasion of private space of common people, the weights are against holding a dumbed down show of happenings with good and loyal returns. The fourth estate is greeting its knights with daily loop of curious task which demands singularity in thoughts, print and view.
Posted by Shakti_Shetty at 12:00 AM 1 comment: Links to this post