Write what's left of you

She often cribbed that he's not romantic enough. Unlike her friends, she was blessed with someone who would go out of his way to do something creative for her. He too knew he could do better but he didn't. He thought gestures aren't necessary. What matters is what you feel and do for your significant other, right? True but not always. Fortunately, he realized this on his own after a long while. So, out of self-imposed compulsion, he decided to do something nice for her. A hand-written letter, he assumed would be the perfect way to express not only his love but also his appreciation in words. One pen, two objectives. Smart boy! Our hero got down to work and pushed his way through four pages. By the time, he could remind her that he was her truly, his knuckle was hurting. It was worth the pain for somebody who hasn't written more than five lines in ages. Proud of himself, he posted the letter and waited for her reply.

Three days later, her SMS read: "Sweetheart, why did you write with your left hand?"

Moral of the story: Improve your pathetic handwriting.
Posted by Shakti_Shetty at 7:06 PM 1 comment: Links to this post 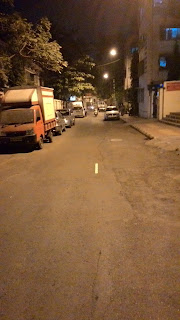 You must have noted the road marks. They are there to help you guide yourself better while driving. These marks are also a sign that urban planning is part of a given location regardless of the potholes that greet you. I recently came across a street that defies all the aforementioned words. There was just one short road mark throughout. As if the guy who was meant to mark the entire street decided to quit the job right after the first stroke. And nobody else took over. Whoever it was, 10 marks for making the effort.
Posted by Shakti_Shetty at 12:26 PM No comments: Links to this post

Labels: anthropological pursuits of our own species, random, Shakti Shetty

It's that time of the year when transfer rumours run faster than Gareth Bale. Who is going to quit which club and who's going to join which manager and so on and so forth. For a football fan, it's an exciting time to be alive and not-so-kicking. Besides, the second part is best left to the professional footballers. Given the momentum they enjoy not just on the field but also on the economic scale, they indeed inhabit a different universe altogether. And it's not about the money, which they get in abundance for their services anyway although for a limited period. Imagine playing more than 10 months a year. Imagine being their pounding hearts. Imagine being fitter than a soldier. Imagine hearing your name screamed as you enter the stadium or abused as you leave. Now, imagine how they manage to capture OUR imagination despite knowing that we don't gain a single penny out of their endeavours. Like said earlier, it's not about the money for us. We are just guinea pigs in their social experiments, come to REALLY think of it. They score stupendous goals. We cheer. They bamboozle with their silky moves and fancy nutmegs. We awe. They dive so effortlessly that'd make Louganis insecure. We cringe. They celebrate like hungry robin celebrates summer. We join in. Aren't they awesome? Of course. The awesomest bit about them has to be their stubbornness in not growing up and staying true to their dreams.
Posted by Shakti_Shetty at 7:37 PM No comments: Links to this post

Labels: anthropological pursuits of our own species, football, Shakti Shetty

Did they know more?

I recently watched The Man Who Knew Infinity and although the film is mediocre on so many levels, you can't help but empathize with the protagonist's foreboding. The mathematical genius, Srinivas Ramanujan, is portrayed as an individual who knows way too much but doesn't have the patience to make others understand how he came to know so. In simpler words, he doesn't believe in proofs. He comes up with a theorem and expects the world to believe that it's true. There's no spoiler in admitting that a majority of his theories were true but he didn't have a pleasant time on this planet, especially the latter part of his young life. He passed away at 32. And that's something which baffles me. Some of the finest mathematical minds, who came too close to understanding everything, passed away young. Did they pay a price for knowing too much? After all, Ramanujan wasn't the first. William Clifford left at 33; Clebsch was 39; Bernard Riemann was 40; Galois at just 20; Niels Abel at 26 and so did Gâteaux and Ramsey; Eisenstein was 29. Although it's impossible to wrap your head around their body of work, it's understandable these weren't common people. They were speaking in a language that confounds the brightest of minds even today. In retrospect, Stephen Hawking somehow escaped the noose but to his credit, that didn't stop him from cheating on his loyal wife while being glued to his wheelchair. On the other hand, Newton died a virgin at the age of 84.
Posted by Shakti_Shetty at 6:42 PM 1 comment: Links to this post

Labels: anthropological pursuits of our own species, do the math, Shakti Shetty

“I come from a country and civilisation that gave the world the word that precedes silence and is followed by more silence. That word is ‘Om’. So I dedicate this award to my country.”

That's what Resul Pookutty said in his acceptance speech at the Oscars. The year was 2009 and the government in place back then was UPA. Imagine the kind of reaction we've got from the so-called liberals if these words were uttered in the current BJP regime.
Posted by Shakti_Shetty at 3:08 PM No comments: Links to this post

Labels: anthropological pursuits of our own species, Shakti Shetty 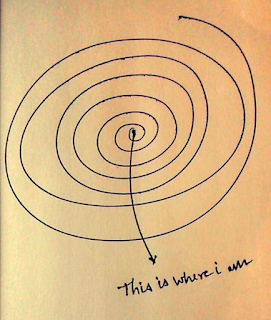 This is how i read maps. You?
Posted by Shakti_Shetty at 7:27 AM No comments: Links to this post

We complete two weeks of married life today. (I was going to say i instead of we, out of old habit.) So far, so good. I always felt marriage is not for me. To be sincere, wedding is more of a social formality and marriage is a word we use to provide overwhelming support to a couple who don't really need it any more than the society. In an ideal world, there would be no need to undergo rituals you don't even understand as it's conducted in a beautiful language that is dying a slow death. It's a lovely circus. But then, we didn't inherit an ideal world and nor are we going to bequeath one. This is what we have and this is what it's going to be like with or without your approval. 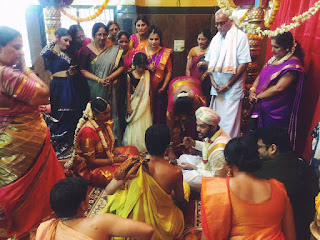 All that said, i really enjoyed my wedding. The most fun birthday i ever had. It was tiring though. And of all the pictures clicked by friends and family members, i liked this one the most. Shared by KG, it catches me asking the priest the exact Sanskrit words to repeat after him while my amma has bent down to correct my vesti as papa looks on. Oh yes, there's my wife there too sitting adorably quietly!
Posted by Shakti_Shetty at 5:19 PM 1 comment: Links to this post

There are many things we believe for the sake of believing. Unsubstantiated axioms are one of them. They say if those we think about appear all of a sudden, they'll live on for a hundred years. I think that'd be true only if you were planning to murder them and boom, they appear in front of you! For instance, a cockroach you weren't expecting to encounter in the kitchen but were somehow scared about it shows up. And you end up trying to kill it. Being a guerilla soldier, it escapes. Now, be assured it will go on to live for a hundred years.
****
I don't understand why the corporate has a misplaced entitlement of time. Why is that productivity is measured in hours instead of output? Last checked, we were in the 21st century and 9-to-5 sounded lame. What sounds lamer is i don't work out anymore. If i don't go to gym, i won't be fit. If i'm not going to be fit, i won't be able to give in my 100%. If i'm not at my 100%, what's the point of getting paid in full at the end of the month? Also, i'm not looking out of the window. I'm thinking. That's an essential part of what i do for a living.

Posted by Shakti_Shetty at 7:32 AM No comments: Links to this post

All the great minds have a society of their own. They don't mingle with the lesser mortals as intimately as they do with their own kind. And this has been going on since ages. It's not a modern fad. Of course, the means of communication has changed. They used to write letters to each other once upon a time. Letters that might have been written when the addressee was alive but reaches his doorsteps posthumously. Gandhi had correspondence with Tolstoy. In fact, one of the last letters the great Russian writer wrote was to the future national leader of India. Similarly, Tagore and Einstein exchanged letters to each other for years before finally meeting in Europe. Joyce and Ibsen used to exchange letters too and so did Asimov and Sagan and such was the case for Dickens and Eliot. The tradition has been alive for eons and will be alive till words exist. Nowadays, with the advent of higher technology, letters have taken a backseat and text messages have become a way of life. But still, it doesn't mean that the greater beings, if you may, continue to interact with their own kind on a regular basis. Kobe wore 10 on his jersey because of his fondness for Messi. Just like Beckham did 23 for Jordan. These people don't even have to speak the same language or have the same accent to understand each other anymore. Their exchange of thoughts rest in their identity. An identity that trespasses the frontiers of words.
Posted by Shakti_Shetty at 1:32 PM 1 comment: Links to this post