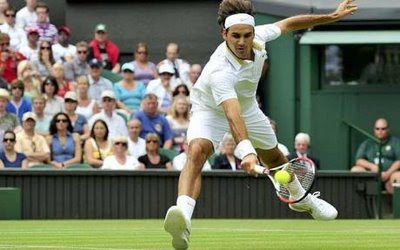 So it was done just like I thought except a bit of improvisation in the final moments. I was wishing that Murray will face the riposte from Feddie boy but coincidentally it was Andy Roddick who went through the drill.

Federer and Roddick have a history of their own and it goes back to their junior days as well but as far as the professional men's tennis is concerned, Federer clearly thumped out better and stronger among the two with 18 victory out of 20 matches with the "King of Tennis". So in a nutshell, it would have been an one-sided affair. But it wasn't meant to be an one-sided story. And it wasn't.

Roddick came to Center Court focused like never before as he knew exactly what it means to be facing Federer on the other side of the net and he remembers how he was reined like a mule by Roger in the US Open in 2006 in front of his cheering crowd. The game plan was to attack Federer with piercing serve and approaching net as many times as possible and this stratagem clearly paid off in the first set itself. He won the first set of the duel with a breakpoint at the very end. So the score now was at 1-0 in Rod's favor.

The second set too was all about holding service and attacking with everything possible and trying to keep the set elongated and durable. But the balance was again tilting in Roddick's favor with the second set reaching a tie break where Roddick again held his serve and posted a 6-2 lead, needing just one point to wrap up the second set. But here's where Federer proved why he is what he is considered and called. He changed the complete face of the tie break and stalled Roddick (who committed some uncharacteristic unforced errors too) at 6 and moved from 2 to 8 thus winning the second set 7-6 (8-6).

Third set again was all too similar to 2nd set and approached tie breaker where Federer showed his upper hand and won the set 7-6 (7-5). By this time, most of the punters must have assumed that Federer will chalk out the match within four set and kiss the golden trophy.

However, Fourth set saw the resurgence of A-Rod and broke Federer's service twice to grab the set 6-3. Mind you, till now Federer failed to gain even a break point in spite of having several feasible chances, which meant Roddick has managed to remain unbroken against Federer for four consecutive sets which became a Grand Slam record in itself for him against Roger in 8 meetings.

So the match is tied at 2-sets each and fifth set was the decider and no one would have guessed that this set would be the longest 5th-setter ever in Wimbledon history lasting 95 minutes and 30 games. Last year, it was an epic battle between Federer and Nadal. This year, it was an epic 5th-setter and it did amazed everyone from retired "legends" sitting in front row to Rog & Rod's family and team to boisterous crowd to millions glued to TV.

Now the game is overwhelming at 14-15 in Roger's favor and Rod is trying to avoid break point and stay alive in the match. Roger Federer who didn't break Roddick's serve even once till now does so when its needed the most and exalts a huge yelp of relief and creates history in the meantime with all the dignitaries including Pete Sampras, Bjorn Borg and Rod Laver delivering a standing ovation to the true "King of Sward". Roddick looked heartbroken but that didn't downed his sense of humor when he pointed to Sampras and said, "Sorry, Pete. I tried to hold him off."
Posted by Shakti_Shetty at 12:38 AM 4 comments: Links to this post